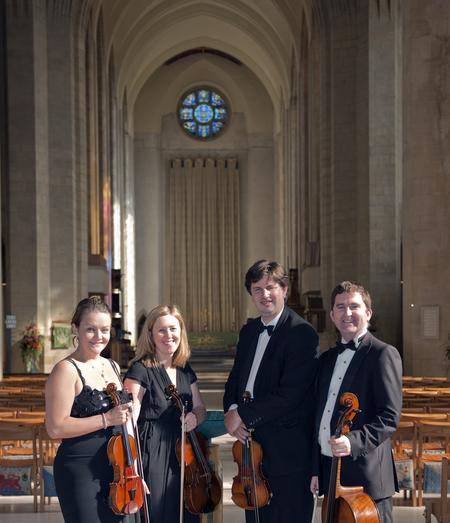 Our afternoon concert on 12th January was given by the Artington String Quartet, a group of distinguished musicians from the Guildford area, who have been playing together since 2015.  They began with Mozart’s ‘Dissonance’ Quartet K.465, perfectly catching the brooding mystery of the opening then switching effortlessly to the flowing conversation of the main part of the first movement.  The calm serenity of the Andante led us on to the genuinely dancing Menuetto, with its more dramatic trio section, and then to the vigorous final Allegro.  The group’s fine grasp of variety of mood and colour was again evident in Beethoven’s G major Quartet, op. 18 no. 2.  Beethoven makes concise use of sharply-contrasting material in the opening Allegro, which gave leader Malcolm Allison, in particular, the opportunity to display his considerable virtuosity.  The opening of the Adagio revealed rich sonorities, especially from Emily Frith (viola) and Jonathan Hennessey-Brown (‘cello);  this material returned, after a sprightly Allegro middle section, with florid decoration shared between first violin and ‘cello.  The lively Scherzo, with its abrupt key changes, saw first and second violin (Catherine Lett) tossing the melodic line backwards and forwards, before the finale surprised and delighted us with some characteristic Beethoven ‘false starts’ in the ‘wrong’ key.

After the interval, we turned to Smetana’s Quartet ‘From my life’.  As its title suggests, it was conceived as an intimate record of the composer’s life, and was premièred in 1876, after Smetana had, like Beethoven, become deaf.  Violist Emily Frith had a key role in this piece, beginning with a dramatic solo at the start of the first movement, which expresses the composer's romantic ideals in life and music. The group showed a real sense of fun in the Polka second movement, with its clear evidence of the influence of folk music.  Jonathan Hennessey-Brown’s hitherto restrained and supportive playing gave way to an authoritative and big-toned ‘cello solo in the Largo, whilst the last movement featured a persistent high E in the first violin part – a poignant reminder of the tinnitus that heralded the onset of the composer’s deafness.

The Artington Quartet are very committed to supporting mental health care, and will be returning to give a Coffee Concert on 10th June in aid of Oakleaf (https://www.oakleaf-enterprise.org/).  A retiring collection in aid of Oakleaf was also held at this concert, and raised a substantial amount for the charity.